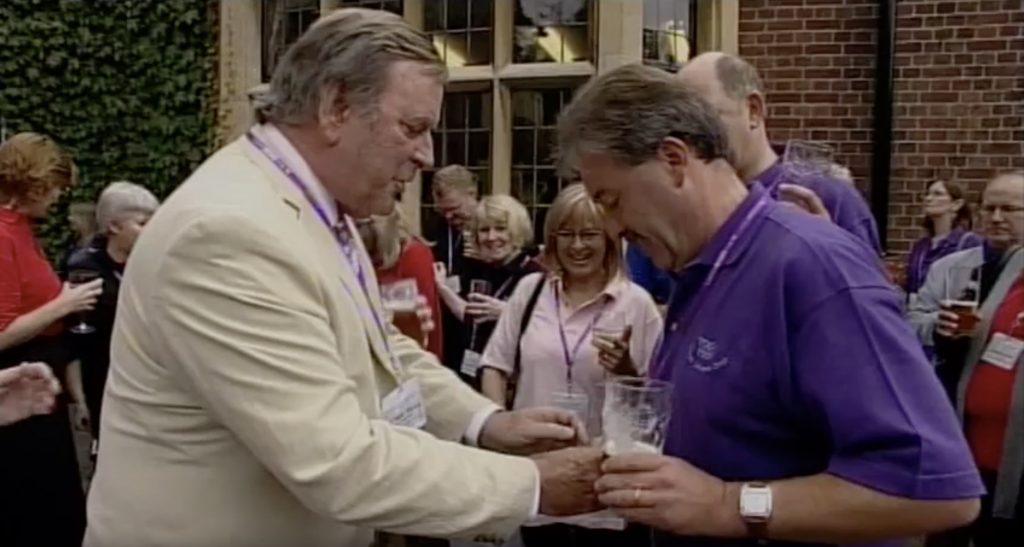 Here’s a chapter from MediaMasters, a book I co-wrote with Alan Stevens.

We interviewed 25 people from all walks of life on how to come across well in the media.

This is the interview I did with Terry Wogan, from nearly ten years ago. I republish it now as a tribute to the great man who died at the weekend.

Terry Wogan is a natural performer, a one-off.

He crossed the water from Ireland and become a huge success in the UK,  despite claiming he had no particular plan.

I think we can learn from him that success is not just ability, but likeability.  Terry’s  presented all manner of shows on television and radio and  always with Irish eyes smiling.   He’s not the slickest presenter in the world, but you always feel you are in safe hands, and you know you’ll have a laugh with him.

Wogan didn’t plan to be a major TV and radio personality.  In fact he was selling insurance for five years, before he won a competition to be on RTE the Irish state broadcaster.

Terry says, ‘I’ve never really been ambitious, I just make it up as I go along.’

‘People who are successful would do well to   remember it’s ninety percent luck.’

I feel like I’ve know Terry Wogan all my life. He’s the only man I let wake me up in the morning, apart from my Dad who brings me a cup of tea at Christmas and Easter.

He’s often called a national treasure, Terry not my Dad. He hosts the breakfast show on the most listened to radio station in the UK, BBC Radio 2. Terry’s the face of the annual BBC charity appeal, Children in Need. He’s large and cuddly like the official mascot, Pudsey the Bear, but without the knotted handkerchief over his poorly eye.

I met him at a Togs convention in Leicester.  Togs are his fan club. It stands for Terry’s old geezers/girls. They meet once a year in Leicester. The convention posters hint at  more exotic locations like Togs 06 L.A and Togs 07 BALI.  But like all Woganesque matters there’s a humorous undercurrent. L.A. is Leicester again and BALI is back at Leicester, innit?

Imagine hosting a breakfast show in London all week and on the Friday, when the jet lag is at its worst, hopping in a car to head a hundred miles up the motorway to meet eighty of your most ardent listeners.

But Terry is as jolly as ever, even if he’d rather be having a nap.

‘You know, I count the hours lost not visiting Leicester’

No-one escapes his wicked sense of humour, especially the loyal Togs.   He refers to them suffering senior moments. There are Togs sweatshirts for sale for charity with the slogan ‘Do I come here often?’

‘These are people of a certain age, but they don’t know it’.

‘They frighten me, as they would frighten any right thinking people’ and with that he looks nervously about before adding, ‘are there any of them around?’

It’s all in jest of course, every single one of the Togs regards him as a personal friend. He’s  been talking to them via their radios in their car, their bedroom, their shower for years.

No matter how tired the Togmeister, as they call him, might be, he gives them all his individual attention. Every single one of them leaves with a warm glow as if wrapped in a comforting duvet. He earns the highest Tog rating.

As a TV interviewer he came across as a jolly uncle, but his skills should never be underestimated. If ever a man could sum up a situation in just a few words it’s Wogan.

I remember watching open mouthed as one guest, David Icke made some outrageous statements about being the ‘son of god’. The studio audience started to laugh. Icke, a former BBC sports presenter, seemed to take this a sign that the interview was going well.  It wasn’t. It was car crash TV. Something had to be said and Terry said it.  ‘They’re laughing at you, they’re not laughing with you.’

What tips does Terry have for anyone appearing on TV or radio?

Something we could all do well to remember. The number of times I’ve been chatting to   witty, charming, lively people in the build up to an interview. Once the cameras roll, they go into ‘rabbit in the headlights’ mode.  All personality goes out of the window.

Not Terry, he’s just the same in real life.

If you want to see Terry really earning his money, watch his interview with Anne Bancroft on YouTube.   The Hollywood star of films like the Graduate hates live TV. So provocative and confident as Mrs Robinson, Bancroft completely clammed up, with the shortest of yes/no answers. ‘You don’t want to be here, do you?’ says Terry.  ‘No’, says Anne.

Being jolly, witty and irreverent for a living inevitably means sometimes upsetting people.

Terry’s charm is that people don’t stay mad at him for long.  It didn’t go down too well in Denmark, when he referred to their rather odd Eurovision presenters as ‘Dr Death and the Tooth Fairy’, but he survived.  In fact his irreverent Eurovision commentary is the only reason most Brits tune in to the TV and many countries opted for years to use the BBC coverage instead of mounting their own.

During a TV show to pick the UK entry for Eurovision, Terry had a senior moment himself. The programme reached a dramatic conclusion with the announcing of the winning act, but Terry announced the wrong name. He had to be corrected by his co-host.

But he’s not one to dwell on mistakes like that, or to blame anyone else.

‘Nobody died. It’s a TV programme. It wasn’t the general election. People got a bit confused’

In a poll in the early nineties he was voted the most popular person in Britain, and simultaneously the least popular. That’s what I call a media master.

I think his secret is not taking life too seriously. In his genial Irish way he gently takes the mick out of everyone, and especially himself.  What do you expect from a boy from Limerick?  Like the Irish city,  famous for its five line poems, you know with Terry, you’ll always be laughing at the end.